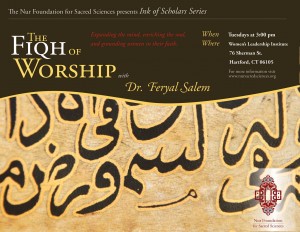 Prof. Feryal Salem has organized two weekly series for Muslim women. The first will be a series called Ink of Scholars, which will provide classes focusing on mastering the essential Islamic sciences known as fard ‘ayn. The second series is Food for Reflection, which will focus on establishing regular gatherings for Muslim women intended to foster reflection, worship, and deepening of faith.

“Throughout the centuries of the transmission of Islamic education, knowledge has been divided into that which is obligatory for each individual to aquire (farḍ ʿayn) and that which is obligatory for only a critical mass of people in a community to learn (farḍ kifāya). The fiqh of worship, specifically laws related to ritual purity (ṭahāra), prayer (ṣalāh), fasting, hajj, and zakāt, are considered to be from the farḍ ʿayn sciences that every Muslim man and woman is required to learn to ensure that their acts of worship are performed properly and hence accepted by God. Rather than the emphasis on correct ritual practice being derived from a perspective of legalism, men and women of deep faith have recognized the immense spiritual benefit derived from ritual practices when performed correctly.

“Prof. Salem will be teaching out of the book “Fiqh al-ʿibādāt ʿalā madhhab al-Shāfiʿī” authored by the prominent legal scholar Hājja Duriyya al-Ayṭa. Ḥājja Duriyya was a student of fiqh of the late Damascene scholar ʿAbd al-Karīm al-Rifāʿī at a time when it was rare for women to study Islamic sciences. Shaykh ʿAbd al-Karīm al-Rifāʿī was one of the most pre-eminent scholars of Damascus and his decision to counter the exclusion of women from religious learning would have a significant impact on the future of female Muslim scholarship. Ḥājja Durriyya was among a gifted group of women who studied under Shaykh ʿAbd al-Karīm the core classical texts of the Shāfiʿī madhhab which included: al-Muqaddima al-ḥaḍramiyya, Sharḥ al-Bayjūrī, Sharḥ al-taḥrīr, Mughnī al-muḥtāj, Rawḍat al-ṭālibīn, and al-Majmūʿ. She became the leading student in her class and used the expertise and permission (ijāza) she received to teach Shāfiʽī fiqh to compose her magnum opus: Fiqh al-ʿibādāt ʿalā madhhab al-Shāfīʿī.

“Join us as we continue the legacy of Muslim female scholarship! Classes are held every Tuesday at the Women’s Leadership Institute across the Hartford Seminary from 3-4:30 pm.

For further details about classes contact info@nursacredsciences.org.Photocopies of the translated text will be provided.

The second series is the Food for Reflection Series which will focus on establishing regular gatherings for Muslim women intended to foster reflection, worship, and deepening of faith. This one meets on Wednesdays at the Women’s Institute Leadership building, again from 3-4:30 p.m.

Prof. Salem explains the focus of this series:

“While many are aware of the importance of the Sunna of our Prophet (PBUH) to understanding the Islamic tradition, Muslims are often at a loss as to how to connect with this Sunna when its sources are so copious. The Riyad al-Salihin is Imam al-Nawawi’s concise compilation of core hadiths which capture the essence of the Sunna in one (without translation) manageable volume. Its title which means the “Gardens of the Righteous” has been regarded by scholars as a treasure trove that comprehensively covers virtually all aspects of the Islamic tradition in the words of our Prophet (PBUH). In the course of going through this work the learner gains insight into aspects of Islamic spirituality, upright conduct, and elements of daily practice that involve Islamic ethics and moral practice. In addition, the student of the Riyad al-Salihin partakes in a journey through which he or she acquires an intimate familiarity with the words and teachings of the final Prophet thus engendering a love for him (PBUH) that results from knowing him.

“Scholarly commentaries rooted in the rich Islamic scholastic tradition are one of the many essential cures for the often literalist readings of hadiths devoid of context or correct understanding plaguing our world today. Come join us in this transformative gathering of fruitful discussions that open the mind and enlighten the heart!

“Valuable original translations from Arabic texts will be provided for students. We will begin with a session of Qur’anic recitation and sending prayers upon the Prophet (PBUH) prior to our study.

Recommended texts: The Gardens of the Righteous and Gatherings of Illumination