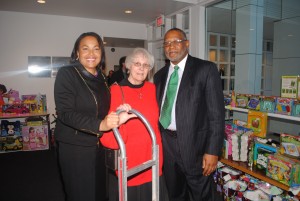 Stuffed animals, dolls, train sets and art supplies have taken over Hartford Seminary’s lobby during the annual Christmas Gift-Giving Ministry organized by Prof. M.T. Winter. During the first week in December, Deputy DCF Commissions Michael Williams visited the Seminary to see the ministry in action as social workers “shopped” for gifts for their clients.

“We have a lot of children who are placed in living environments that are new to them,” said Williams, who is a former pastor and a 1987 graduate of the Black Ministries Program. The agency searches for ways to make that transition easier, especially around the holidays, he said.

For years, the program benefited the children of women incarcerated at the prison in Niantic, but that ended last when a key player retired. Last year, the program was reinvented as a way to reach children in the Greater Hartford area who fall through the cracks of the social services network. In 2012, 1,800 children received gifts through the program, according to the Rev. Gail Williams, a Women’s Leadership Institute graduate who is now in the Seminary’s Doctor of Ministry program.

“These are kids falling below the radar,” she said. “What a blessing this is. It’s exploding.”

Prof. Winter and her helpers purchased new toys during the Black Friday weekend for the giveaway. Also donated were stocking stuffer toys as well as 200 stockings that were sewn by the costume department at Central Connecticut State University through the efforts of Diane Taylor, a student in the Women’s Leadership Institute.