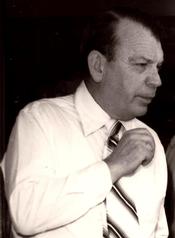 Willem A. Bijlefeld, 88, who retired from Hartford Seminary in 1990 after 25 years as a Professor of Islamic Studies, Academic Dean, Editor of The Muslim World, and founder and director of the Macdonald Center, passed away on Sunday, Dec. 15, after a long illness.

"Wim loved Hartford  Seminary, and he was a  highly valued and much appreciated presence at the seminary for the decades he taught here," President Heidi Hadsell said. "He spent  most of his working life here at Hartsem, providing leadership  in the study of Islam and Christian  Muslim relations, and he kept up with the comings and goings and work of the Macdonald  Center  since he retired perhaps 20 years ago. I continue to meet many people here and around the world who remember Wim and ask about him, always remarking on his scholarship and on his capacity for human compassion and warmth. Getting to know Wim and [his wife] Ineke has been a constant source of joy for me ever since I came to  Hartsem."

Born in Indonesia, Prof. Bijlefeld made important contributions to the field of Christian-Muslim relations, starting in 1959 with the publication of his doctoral dissertation, "Islam as a Post-Christian Religion: An Inquiry into the Theological Evaluation of Islam, Mainly in the 20th Century."

"In each of these places, as in many other parts of the world which he visited, Prof. Bijlefeld not only inspired students, but assisted churches to adopt many of his interfaith insights into their own ministries," according to a tribute to him in The Muslim World on the occasion of his retirement.

As Academic Dean, Prof. Bijlefeld oversaw significant changes at Hartford Seminary as the academic study of Islam became an emphasis. In 1974, Prof. Bijlefeld founded the Macdonald Center for the Study of Islam and Christian-Muslim Relations. In 1977, the Macdonald Center formed a partnership with the Task Force on Christian-Muslim Relations with the National Council of the Churches of Christ in the United States.

"Much of Prof. Bijlefeld's energy in these years was given to travel as he extended the resources of the Macdonald Center to meet the growing interest of Christians and Muslims in dialogue. As a lecturer or consultant, he was in touch with 30 institutions in 14 countries, several of them on a regular basis," according to the Muslim World.

Prof. Bijlefeld was the editor of The Muslim World for 24 years. He nurtured it into a leading scholarly publication for Islamic studies and the study of Christian-Muslim relationships, past and present.

In 1990, Prof. Bijlefeld was honored at an international conference held at Hartford Seminary on the theme of "Christian-Muslim Encounter." At that time, the Prof. Bijlefeld International Visiting Fellowship was established to invite bienially a Muslim or Christian scholar from Africa or Asia to address the seminary community on intellectual concerns identified by Prof. Bijlefeld.

In retirement, Prof. Bijlefeld moved to Vermont with his wife Ineke and lived in a house redesigned by his architect brother, Jan, hosting hundreds of visitors – friends, family and former students and colleagues – from around the world. According to his obituary, his interest in Christian-Muslim relations grew from his early childhood in Indonesia where his parents were mission workers.

In lieu of flowers, the family asks that donations be made in Prof. Bijlefeld's honor to the Mt. Ascutney Hospital Hospice Unit at 289 County Road, Windsor, VT 05089 or the Reading Volunteer Fire and Rescue Squad at PO Box 83, Reading, VT 05062 or to a charity of one’s choice.

A memorial celebration will be held in the spring.