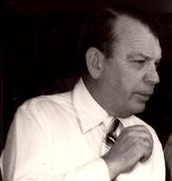 The Hartford Courant’s Extraordinary Life column of Jan. 4, 2014, featured Prof. Willem Bijlefeld, a longtime Hartford Seminary professor, dean and founder of the Macdonald Center. Prof. Bijlefeld, who retired from the Seminary in 1990, died on Dec. 15, 2013, at the age of 88.

The article, “An Advocate of Deeper Christian-Muslim Understanding” written by Anne M. Hamilton, described Prof. Bijlefeld’s life through interviews with his wife, Ineke, two of his children, and colleagues, including Prof. Steven Blackburn, the seminary’s librarian.

“Willem A. Bijlefeld, the son of a missionary and a former dean of Hartford Seminary, was an internationally known scholar, as well as an advocate of greater understanding between Christians and Muslims. A former Dutch citizen, he spoke Arabic fluently and traveled frequently to encourage a deeper dialogue between the two faiths.”