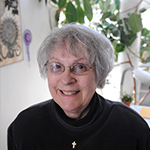 A new audiobook recording of Prof. Miriam Therese Winter’s “The Singer and the Song” has been honored as an editor’s pick by AudioFile and received an Earphones Award.

The book, originally published in 1999, was released this year in an audiobook recorded by famed singer-songwriter Janis Ian, who also sings a number of Prof. Winter’s songs on the recording.

AudioFile writes: “Singer-songwriter Janis Ian delivers both story and song in award-winning musician Miriam Therese Winter’s memoir. Each chapter moves from Winter’s personal experience to the spiritual lesson she learned from it, each of which is eventually expressed in her music. Ian renders Winter’s story in a lilting and engaging tone. As Winter describes working with refugees in Cambodia and starving children in Ethiopia, Ian helps listeners feel everything she felt. While the author’s impact on the poor is clear, it’s her music that helped many more determine their own life pathways. Ian uses her crystalline vocal talents and evocative guitar playing to take this engaging story to a level rarely experienced through audio. R.O. Winner of AudioFile Earphones Award © AudioFile 2013.”

Hartford Seminary will host an audiobook listening party with Prof. Winter on Jan. 14 at 7 p.m. She will be available to sign copies of the audiobook.