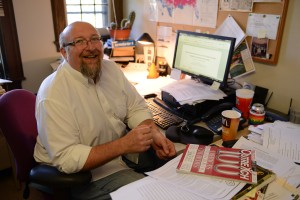 Two of Prof. Scott Thumma’s  studies for the Hartford Institute of Religion Research have been cited in recent news articles.

The first, in a recent issue of the Christian Chronicle, is about congregations using internet technology to reach out to congregants, including the use of live streaming of worship services.

From the article: “A 2011 study, ‘Virtually Religious: Technology and Internet Use in American Congregations,’ found that religious congregations’ use of websites and email more than doubled in the previous decade. Newer forms of technology such as Facebook, blogs, texting and streaming were less prevalent but “nevertheless beginning to transform the ways religious groups interact and enhance their sense of community,” the study determined.

“All faith groups in this day and age should be hybrid congregations,” wrote Prof. Thumma, who prepared the study for the Hartford Institute for Religion Research in Connecticut. “In other words, their ministry needs to be part physical and part virtual.”

On Amarillo.com this month, Prof. Thumma was also featured in an article about churches with multiple locations and the growth of that trend.

“According to a study by faith researchers Warren Bird and Scott Thumma, 46 percent of U.S. churches reported holding services at an average of 3.6 locations in 2011, while another 20 percent were considering adding campuses.”