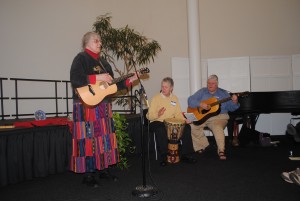 A lively crowd joined Prof. Miriam Therese Winter on Jan. 14 to sing and to celebrate the release of her autobiography, The Singer and the Song: An Autobiography of the Spirit, in audiobook form.

The audiobook, released in November, is narrated by singer-songwriter Janis Ian, who won a Grammy for her own autobiography on audiobook, Society’s Child. Ian also sings many of Prof. Winter’s most beloved songs on the audiobook, which has already won an Earphones award and been selected as an Audiofile.com Editor’s Pick.

Prof. Winter told the story of how Janis Ian became involved in the audiobook project and how the two were “a couple of Jersey broads” who had become soul sisters.

Prof. Yehezkel Landau read a note that Janis Ian sent for Prof. Winter, which said, in part: “She is one of the dearest souls on earth, as dear to own my heart as the strings of my guitar. MT, the only thing better than writing this little note would have been to deliver it in person. I absolutely adore you.”

The evening ended with a sing-along of some of Prof. Winter’s most well-known songs, including Joy Is Like the Rain, It’s a Long Road to Freedom, Spirit of God, and The Wedding Banquet.