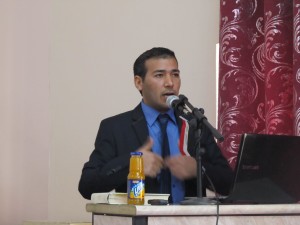 Haidar Reda, an International Peacemaking Student from 2011-12, sent an update from Iraq, where he has founded an organization called Ur for Interfaith Dialogue & Peacemaking CC.

The organization recently celebrated World Interfaith Harmony Week 2014 by organizing a public event entitled “Rights of Minorities under Islamic Rule” in collaboration with the College of Applied Sciences at the University of Karbala, Iraq. The program included scriptural readings representing the diverse religious traditions of Iraq, such as the Ginza Rabba of the Sabian Mandaens, Old Testament, New Testament, and Qur’an.

The event opened with a lecture by Prof. Muhsan Jasem, followed by Haidar Reda, who gave a speech entitled, “Introduction to the Iraqi Minorities, and their rights under Islamic rule.” The final presentation was by Dr. Suhad Saleh, who delivered a lecture entitled “Rights of Minorities in the Iraqi Constitution.” More than 200 guests attended the event, which was covered by local television.

the diverse faiths of Iraq. It has a focus on young adults experiencing other faiths through visiting sacred sites and convening gatherings with diverse faith leaders, allowing the faiths of Iraq to speak for themselves. Ur is a member of United Religions Initiative.

The International Peacemaking Program at Hartford Seminary is for Christians, Muslims or Jews who live in overseas areas where there is interreligious conflict. Students in the International Peacemaking Program spend an academic year studying interfaith dialogue and leadership skills that also includes an emphasis on public engagement and public speaking skills. In addition to their formal studies, students are embedded in a local faith community where they experience American religious culture firsthand.