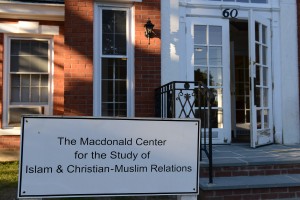 In his blog on the Huffington Post, Rabbi Joshua Stanton cites the founding of Hartford Seminary’s Macdonald Center as one of the key events that shaped the blossoming field of Inter-Religious Studies.

The blog, “Inter-Religious Studies: A Field of Its Own,” talks about the “broad impact of the interfaith movement” and suggests that it has roots that go back further than many think.

The first of those roots, he said, was the founding of the Macdonald Center for the Study of Islam and Christian-Muslim Relations.

The MacDonald Center at Hartford Seminary came forth from a dedication to Muslim-Christian understanding dating back to 1893. (Many might likewise suggest that 1893 was a watershed year more broadly, with the Parliament of the World’s Religions in Chicago.) The MacDonald Center can be seen as a precursor to others that have flourished, such as the Prince Alwaleed bin Talal Center for Muslim-Christian Understanding at Georgetown University and other interreligious centers that have been created at academic institutions.

Rabbi Stanton goes on to say that the inter-religious or interfaith movement is gaining momentum:

With more funders than ever, new publications, new professorships, and recognition by the largest academic body pertaining to the study of religion, Inter-Religious Studies has truly become its own field. It has gained significant momentum in recent years and appears poised to continue its expansion. While it is unclear that a field of study can, in and of itself, change the dynamics at play between religious communities, it can at the very least help us better understand them and serve as a beacon for the many who now seek to improve them.