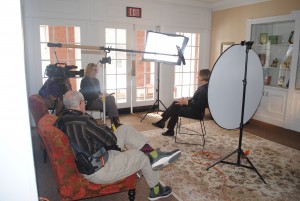 CBS News has issued a press release about a special that features Hartford Seminary. Local listings for the show are available here: https://www.facebook.com/notes/cbs-religion-culture/a-new-calling-spiritual-second-careers/566261783472732 The listing will be updated as stations are added. To view the show online after it airs, visit: http://www.cbsnews.com/religion-and-culture/

A NEW CALLING: SPIRITUAL SECOND CAREERS, a CBS Interfaith Special that explores the phenomenon of mature adults moving from successful secular careers into the world of religion, will be broadcast Sunday, April 13, on the CBS Television Network (check local listings).

The broadcast asks why a successful professional in a secular career chooses to become a teacher, minister or caregiver in their respective Christian, Jewish or Muslim faiths. For example, Mike McCurry, who is best known as the former press secretary to President Bill Clinton in the mid-1990s, talks about his time in the White House and what led him to attend Wesley Theological Seminary in Washington, D.C., where he now teaches a course in religion and politics. McCurry shares how the seminary inspired a shift in how he speaks about his own faith and the role of religious values in politics.

A NEW SPIRITUAL CALLING also features David Daniel Klipper, a former investment banker who is now a rabbinic pastor and supervisor of Stamford Hospital’s clinical pastoral education program in Connecticut. Klipper explains his decision to leave behind a lucrative Wall Street career for one in hospital chaplaincy.

Cathy Abbott’s story is an equally interesting one; she was a successful energy executive whose career brought her to the upper echelons of management at the Enron Corporation, among other corporations. In 2003 she entered Wesley Theological Seminary and went on to serve as pastor for seven years at Arlington Temple United Methodist Church in Roslyn, Va. Today she is the Arlington District Superintendent for the Virginia Conference of the United Methodist Church. Abbott shares what led her to hear this call to ministry.

Viewers will also meet Samsiah Abdul Majid, who recently retired from the United Nations after more than 30 years as a public information officer and human resources manager. Originally from Malaysia, Majid is a practicing Muslim who decided to go back to school to learn more about her faith. While fulfilling a hospital chaplaincy requirement at Hartford Seminary, she decided to pursue a second career as an Islamic chaplain and will graduate in May.

Hartford Seminary’s President Heidi Hadsell talks about the demand for Islamic chaplains across the U.S.; Dr. Feryal Salem, Assistant Professor of Islamic Scriptures and Law, and the co-director of the school’s Islamic chaplaincy program, shares his observations as well. Hartford Seminary has the only accredited Islamic Chaplaincy program in the country.

John P. Blessington is the executive producer and Liz Kineke is the producer. This documentary was produced after seeking input from clergy, scholars and others in the religions and/or faith communities presented. We interact with a consortium of Catholic, Protestant, Jewish, Islamic, and various interfaith organizations.