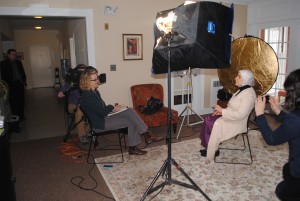 The Religion and Culture Desk of CBS News brought a production crew to Hartford Seminary on Monday, March 10, to film a segment for a show about “second acts” in public life.

Producer Liz Kineke arrived in Hartford with an assistant producer, a cameraman and a sound engineer. They filmed a clergy workshop on time management happening at the Macdonald Center building, then set up for interviews in the building’s lobby.

The focus of the CBS Hartford Seminary segment will be Samsiah Abdulmajid, an Islamic Chaplaincy student originally from Malaysia who worked for many years at the U.N. in Thailand, New York and London. After retiring from the U.N., she decided to learn more about her religion and enrolled in some Islamic studies courses at the Seminary.

Once here, Samsiah learned about the Islamic Chaplaincy program and decided to take on a second career. In the interview with CBS, she talked about her Clinical Pastoral Education experience at a hospital and how humbling and important that was to her.

CBS also interviewed Prof. Feryal Salem, co-director of the Islamic Chaplaincy Program with Prof. Timur Yuskaev. Dr. Salem talked about the training that chaplains receive and how the American Muslim community has increasingly accepted the term “chaplain.” She described their work in hospitals, prisons, in the armed services and on college campuses.

In her interview with CBS, President Heidi Hadsell talked about the origins of the program — which developed in the 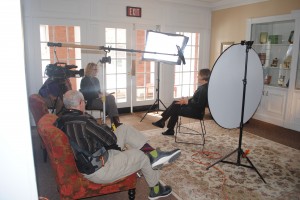 1990s after a request from the U.S. Armed Services — and how the need for Islamic chaplains has increased across the country. She also discussed the Seminary’s other programs and its unique interfaith environment.

The program is tentatively scheduled to air on April 13 and will be posted on the CBSnews.com website. More information will be posted on our website as soon as it becomes available. Visit the CBS Religion and Culture page here.