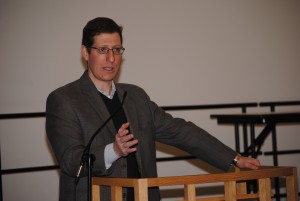 The University of Hartford generously sent one of its own to Hartford Seminary Friday to give a lunch talk on “Jewish Theology and the Holocaust.”

Dr. Avinoam Patt is the Philip D. Feltman Professor of Modern Jewish History at the Maurice Greenberg Center for Judaic Studies at the University of Hartford, where he is also director of the Museum of Jewish Civilization. He is the author of Finding Home and Homeland: Jewish Youth and Zionism in the Aftermath of the Holocaust.

Dr. Patt gave an overview of Jewish theological responses to the Holocaust, drawing on his work as a historian at both UHart and at the Holocaust Museum in Washington, DC.

He described nine different theological responses to the Holocaust, ranging from the notion that the Jewish people are “suffering servants” meant to suffer for the sins of the world to the idea that God turns away at times from human affairs to the “inscrutable mystery” approach.

Dr. Patt also talked about how Jews reacted during the Holocaust. Some found a deepening of their faith, even risking their lives to perform Jewish rituals, while others turned away and decided they couldn’t believe in a God that could let such suffering happen.

To watch a taping or listen to a podcast of the event, please see below: