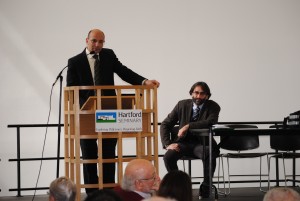 The Rev. Dr. Mitri Raheb, pastor of the Evangelical Lutheran Church in Bethlehem and a leading Palestinian Christian theologian, writer, and activist, spoke at Hartford Seminary on Wednesday about his latest book, Faith in the Face of Empire: The Bible Through Palestinian Eyes.

Dr. Raheb, who spent three months doing post-doctorate research at Hartford Seminary in 1996, is on a tour of the U.S. to promote the latest of his 16 books. He began by saying that the first 15 books could be seen as “dancing to the rhythm of 19th century European organ music.” This last book, he said, is where he has finally started to “discover the beat of the Palestinian drum.”

Faith in the Face of Empire, he said, was his attempt to bridge the gap between the theologians and the political scientists, who look at different time periods without any overlap.

He also said the “Palestinian narrative” hasn’t been part of the discussion as strategists talk about the Middle East. That narrative, he said, has been one of a series of occupations, the story of which can be told through the lens of the Bible. 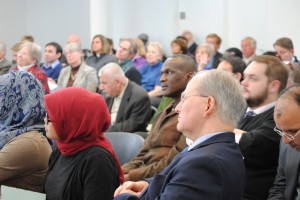 “The whole Bible is nothing but the response of the occupied people to the empire,” he said.

In a discussion with the audience, Dr. Raheb said he believed that politics has become too focused on talking about peace rather than making it, making a distinction between the politics of a place and its people. He also said that too much religion has created problems as well.

“As a pastor, I work for less religion, more faith,” he said.