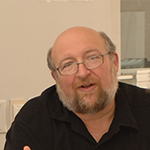 Prof. Scott Thumma was featured in an interview about the expansion of Rick Warren’s megachurches during NPR’s Marketplace Morning Report on April 23.

According to the report by Dan Weissmann,  Warren, the author of the best-selling “The Purpose-Driven Life,” is launching branches of his Los-Angeles-based Saddleback Church in 12 cities around the world. Warren’s sermons are piped in via satellite during services.

Prof. Thumma, an expert on megachurches, put the phenomenon into a global perspective:

“If you just look at it in the United States, you see it as a suburban reality,” he says. “It’s kind of recreating a kind of small-town connectedness with people who have like values and interests.” Around the world, he says, that’s “what we’re all  longing for, in the anonymous urban setting.”

To read the article and see some of Prof. Thumma’s research, go to this link. The radio interview can be heard by clicking the play button below.

Prof. Thumma is offering a free webinar on Wednesday, April 23, at 7 p.m. on Social Media and Ministry: Extending Your Reach. Register for it here.