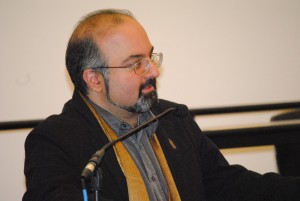 Professor, writer and speaker Omid Safi had a challenging message for those attending his talk at Hartford Seminary on April 24: “The world is messed up. It is broken and we are the ones that are breaking it.”

In his hourlong address, Dr. Safi gave an overview of humanity’s failings in taking care of “the least of our brothers” as well as the health of the planet. The prophetic tradition at the heart of the Jewish, Christian and Muslim faiths, he said, calls on us to be uncomfortable about the sad state of our world and to do something about it.

Using Martin Luther King Jr. as an example of a prophet voicing uncomfortable truths, Dr. Safi talked about making change in the world “because the mandate of our conscience leaves us no other choice.”

He called on ministers, rabbis and imams to continue King’s tradition of asking us to examine our actions in the face of injustice. “It should be a moral and religious crisis,” he said.

Omid Safi is a leading Muslim public intellectual, award-winning teacher and speaker. He has been a Professor of Islamic Studies at University of North Carolina at Chapel Hill, specializing in contemporary Islamic thought and classical Islam. He is the Chair for the Islamic Mysticism group at the American Academy of Religion, the largest international organization devoted to the academic study of religion. He has been nominated six times at Colgate University for the “Professor of the Year” award, and before that twice at Duke University for the Distinguished Lecturer award. At the University of North Carolina, he received the award for mentoring minority students in 2009, and the Sitterson Teaching Award for Professor of the Year in April of 2010.