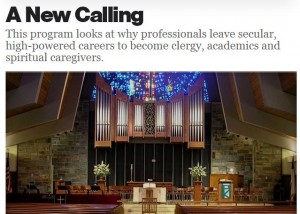 CBS News began airing its program “A New Calling: Spiritual Second Careers” on Sunday, April 13, on local CBS stations around the country. The show will also air Sunday, April 20, on New York’s WCBS station at 1 p.m. and Chicago’s WBBM station at 11:30 a.m., but you can also watch it here!

Featured on the program is Hartford Seminary student Samsiah Abdul Majid, whose segment begins at 15:54 in the 30-minute show. She enrolled in the Islamic Chaplaincy program after retiring from a long career at the United Nations and talks about why she chose to pursue a spiritual second career.

Also interviewed were President Heidi Hadsell and Prof. Feryal Salem, who is the co-director of the Islamic Chaplaincy program.

According to a CBS press release, “The broadcast asks why a successful professional in a secular career chooses to become a teacher, minister or caregiver in their respective Christian, Jewish or Muslim faiths. For example, Mike McCurry, who is best known as the former press secretary to President Bill Clinton in the mid-1990s, talks about his time in the White House and what led him to attend Wesley Theological Seminary in Washington, D.C., where he now teaches a course in religion and politics.

“Viewers will also meet Samsiah Abdul Majid, who recently retired from the United Nations after more than 30 years as a public information officer and human resources manager. Originally from Malaysia, Majid is a practicing Muslim who decided to go back to school to learn more about her faith. While fulfilling a hospital chaplaincy requirement at Hartford Seminary, she decided to pursue a second career as an Islamic chaplain and will graduate in May.