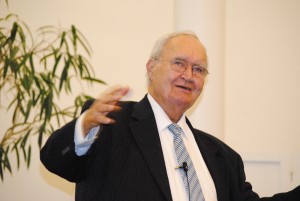 Hartford-based attorney Peter Kelly has traveled around the globe in the name of democracy-building, and he shared some of his stories on May 12 as the speaker for the biennial Rion Lecture at Hartford Seminary.

Mr. Kelly, who was elected to the Seminary’s Board of Trustees earlier in the day, said the impetus for his life’s work of helping the disadvantaged started when his father died. As a young man, he witnessed 100 or more men who worked for  his father at a sewage treatment plant attending the funeral.

“This is what life is all about,” he said. “Making it better for people who haven’t been given advantages.”

Along with building a successful career as a lawyer and businessman, Mr. Kelly became involved in or founded organizations that promote democracy and run elections around the world.

In 2001, for example, he helped establish free elections in Iraq, which did not give equal status to women. His organization arranged to have voter registration happen at the same time as registration in the “food for oil” program so that a large number of women were registered to vote.

“When people are allowed to live freely, a lot of good things happen,” he said.

Mr. Kelly told stories of promoting democracy in Russia, in Central America, and in South Africa, among other places.

He linked those experiences to the mission of Hartford Seminary and said he was looking forward to working with an institution whose goal is to “create a world in which differences are respected and common good takes precedence.”

The biennial Rion lecture, named in honor of Michael Rion, a former Seminary president, honors an individual who embodies a dedication to ministry in daily life and is committed to service to others.

View the entire lecture below: