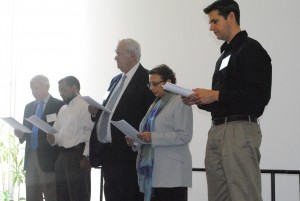 Hartford Seminary’s Board of Trustees welcomed three new members to its ranks at its annual meeting on May 12. It also confirmed new terms for several trustees, welcomed new corporators and said goodbye to four board members.

The new trustees are Peter Kelly, the Rev. Matthew Laney, and the Rev. Stephen W. Camp.

Peter Kelly, an attorney and businessman, has long been active in Democratic politics at the local, state, and national level. He has served as Treasurer and National  Finance Chairman of the Democratic National Committee and was a member for 16 years. He served as a senior political advisor to Al Gore in 1988 and 200, and to Bill Clinton in 1992 and 1996.

Mr. Kelly was founder, director and Treasurer of the National Democratic Institute for International Affairs and Chairman of The Center for Democracy, a bipartisan foundation, both based in Washington, DC.

He is a graduate of Georgetown University and the Yale Law School, where he served as an editor of the Yale Law Journal. He is a senior principal of Updike, Kelly & Spellacy, P.C., a law firm with offices in Hartford, New Haven and Middletown, CT. He is the former Chairman of The PBN Company, a strategic planning firm with offices in Moscow, Kiev, London and Washington, and he previously served as Chairman of Black, Kelly, Scruggs and Healy, a Washington public affairs firm, and as Managing Director of Burson-Marsteller (Latin America).

Rev. Laney is a native New Englander, born and raised in Maine. He moved to New Jersey with his family during his teen years and graduated from Kenyon College in 1993 with a B.A. in Religion and a minor in Theater. After graduation, he moved to Atlanta and worked with organizations serving the homeless and emotionally disturbed adolescents.

The Rev. Stephen W. Camp was born and raised in the Hartford area and was nurtured at Faith Congregational Church. He attended Bethune-Cookman College in Florida, where he received a Bachelor of Science degree in Religion and Philosophy. He received his Master of Divinity at Chicago Theological Seminary before being called to ministry as pastor of the Lincoln Memorial Congregational, United Church of Christ in Chicago.

After seven years, Rev. Camp accepted a position as Executive Director of the South Side Health Project, which provides medical care for poor women and children.

In 2009, Rev. Camp was called to be the Senior Pastor of Faith Congregational Church, Hartford’s oldest black church.