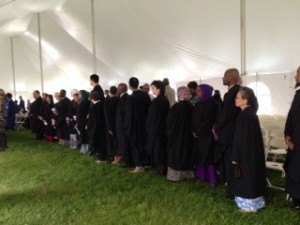 Commencement speaker Dr. Jane I. Smith, who taught at Hartford Seminary from 1999-2008, told graduates on May 16 that she hoped they would remember the Seminary as a “fascinatingly diverse” place that does things “no other graduate school anywhere near its size does.”

A total of 55 students received degrees or certificates from the Seminary in 2014, and an honorary degree was awarded to the Rev. Donald R. Steinle, recently retired Executive Director of the Hartford-based Christian Activities Council.

“Now, suddenly, you’re free to be who you are and what you want to be,” she said. “I hope that what you will not feel free to do is to forget what you have learned here.”

Dr. Smith then told stories about three former students she knew who sometimes struggled but eventually found their voices at Hartford Seminary. Though the stories took place a long time ago, she said, “students are still seeking to find their identities.”

“You graduates today are being asked to provide service to a world that’s a lot more complex,” she said. “Often, hostilities are taking place where Hartford Seminary graduates live.”

But the graduates are well prepared, she said, to make a difference.

“Take those talking skills out to the world. Do what you’ve been taught to do here and the world will be a better place for it,” she said.

Prof. David Roozen then talked about honorary degree recipient, the Rev. Steinle, who was given an Honorary Doctor of Divinity.

Dr. Roozen described Rev. Steinle’s work as executive director of the Christian Activities Council in Hartford for 32 years until his retirement in 2013.

Calling him an “urban trailblazer,” he said Rev. Steinle was “committed to a justice that moves us” to “critical engagement.”

In accepting the award, Rev. Steinle congratulated the graduates on a “joyous occasion” and said he was very pleasantly surprised when he found out he would be receiving the honorary degree.

“I hope that some of you will take your special skills and talents into the urban arena,” he said. “Because it is there in our society where people suffer the most.”

Cleo White (BMP ’05) and Kenneth Stavis helped us close out the ceremony with a musical performance that you can watch below: