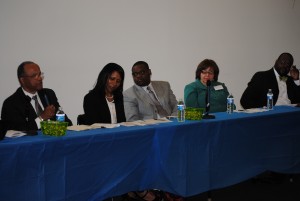 As a kickoff to the first ever Black Ministries Program reunion, a panel of nine ministers, academics and churchgoers held a lively discussion on “The State of the Black Church” on Thursday, May 15.

The Rev. Timothy L. Jones, who served a moderator, first asked the panelists to gauge the state of the “black church.”

The Rev. Bernadette Hickman-Maynard led off by saying that the black church is not a monolith except that it serves people who have a shared experience of repression. “Most black churches are struggling,” she said. “They’re trying to fit new wine into old wineskins.”

Many of the panelists agreed with this assessment. Enola G. Aird — who described herself as a “21st Century Rachel — said she was disappointed that churches aren’t addressing the distress faced by so many parishioners. “As a woman in the pews, I see no organized, coordinated effort to speak to the emotional distress … when all the gains that we thought that we had are fading.”

The Rev. Jean Amos Lys, who spoke from the perspective of the immigrant church, asked the question: “What is the black church in the post-Civil Rights era?”

Echoing a sentiment that many panelists raised, Rev. Lys said, “We know how to do church, but we’re not going outside the church” to reach those in need.

In a discussion about the disconnect between the academy and the church, the Rev. Cleotha Robertson, who is also an academic, said: “The things that they argue about in the academy don’t make the top 20” in the minds of churchgoers.

The Rev. Dr. Shanell T. Smith, who teaches at Hartford Seminary, said she uses a “Will it preach?” test when considering the text being studied to keep her scholarship relevant.

“It’s up to academics to listen,” she said.

Rev. Lys said it’s sometimes a question of holding on to a job. “It’s a struggle with the balance between academy and church. … We think if we tell them the truth, they’ll leave the church.”

In a discussion about the challenges facing the black community, the Rev. Linwood Blizzard II talked about being a 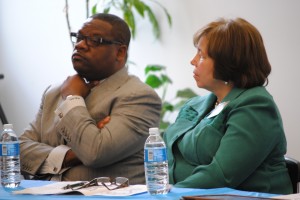 Ph.D. student who’s afraid of getting arrested. There are deep issues of violence and pain facing the community, which require getting out from behind the pulpit to take action, he said.

As part of that discussion, Rev. Hickman-Maynard pointed out that she sees more domestic violence than she does gang or youth violence, making the case that many people, particularly those in the LGBT community, may be afraid to come forward because their “relationships are not supported.”