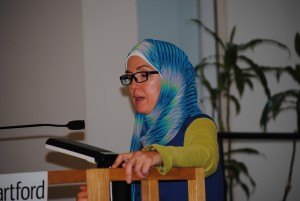 With all the displacement and disasters of the 21st century, both natural and man-made, people can feel disconnected from the place in which they find themselves living, Dr. Ingrid Mattson said in a lecture on June 21 at Hartford Seminary.

Dr. Mattson, who taught at the Seminary from 1998-2012, discussed those challenges and how to respond to them in a talk she called “The Earth Is a Home for You.”

“Disasters really force us back to our bodies,” she said, describing her family’s experience during the October 2011 snowstorm in Connecticut. “They are about place. … Where we are and who is with us determines how we survive. One minute we are strangers, the next we are clutching hands in the dark.”

Finding that send of place and connectedness can be difficult, though, for people who are new to the place they’re living, including those who have fled oppression.

“We live in a time of great displacement and transition,” she said. “To feel like we belong, we need to be connected to both the nature and the culture of that place.”

Often, Dr. Mattson said, it’s easier to connect to the land and to “non-human beings” than it is to connect to the culture. “The Qu’ran talks about other creatures as having their own communities that intersect with ours.”

Along with finding a place in the community, Dr. Mattson talked about the responsibility to live simply and lessen consumption so that we don’t infringe on the rights of those struggling to meet basic needs.

Lessening consumption — and understanding the difference between desires and needs — is a “better spiritual practice,” she said. Indulging in luxuries impacts “the ability of others to meet their urgent life-sustaining needs.” Energy consumption in the United States and Canada is just one example, she said.

Dr. Mattson is the London and Windsor Community Chair in Islamic Studies at Huron University College at the University of Western Ontario in London, Canada. At Hartford Seminary, she was a Professor of Islamic Studies, founder of the Islamic Chaplaincy Program and director of the Macdonald Center for Islamic Studies and Christian-Muslim Relations.