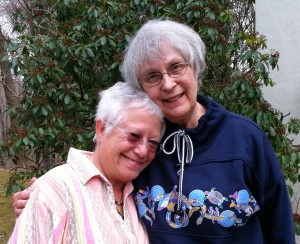 A video is now available of John Seigenthaler hosting a conversation between Janis Ian and Prof. Miriam Therese Winter. Taped at Scarritt Bennett Center in Nashville in May 2013, the program was called When Worlds Collide: Two Jersey Broads on Life, Love, and the Holy Spirit. The two discuss everything from how they met to quantum physics to their mutual love of music.

Prof. Winter’s autobiography, “The Singer and the Song: An Autobiography of the Spirit,” was re-released in 2013 in a special audiobook version narrated by Janis Ian, who won a Grammy for her own audiobook “Society’s Child.” Janis Ian also sings a selection of Prof. Winter’s songs on the audiobook recording.