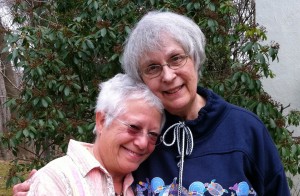 Singer-songwriter Janis Ian, best known for her haunting 1975 release “At Seventeen,” recently wrote about her experience in recording an audiobook of Prof. Miriam Therese Winter’s autobiography, The Singer and the Song. The audiobook project is unusual in that Janis also sings 28 of MT’s best loved songs on it.

Several years ago I was asked to participate in a tribute CD to Miriam Therese Winter, the foremost feminist theologian on the planet. I was particularly intrigued because MT was, in addition to being a Medical Mission Sister, dean of the Hartford Theological Seminary’s Women’s Studies, four-time Catholic Book Award winner, and breast cancer survivor, a darn good songwriter. In fact, she’d sold out Carnegie Hall with her choir back in the day, and “Joy Is Like the Rain” was a song even I had heard.

That request turned into “I Am the One,” a song adapted from a spoken verse poem written by MT in the 1970’s. (And coincidentally, one of my favorite pieces.)

Shortly after, I was telling Stefan Rudnicki, who directed my own Grammy Award-winning audio book, about the project. He and his partner, Gabrielle deCuir, became tremendously excited about the possibility of doing an audio book. Since Audible.com and I were searching for a follow-up project to my own book, they agreed it would make a stunning piece, and away we went.

To read more about Janis Ian’s experience in recording the book, visit her website. She is also offering free downloads of three of the songs recorded for the book.