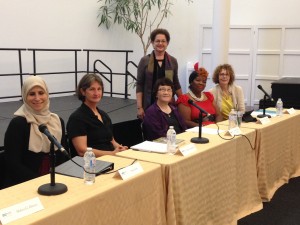 Six women from different faith traditions offered their perspectives on both historical and contemporary views of motherhood on a Sept. 11 panel called NURTURING Faiths: The Intersection Between Motherhood and Religion.”

Moderator Cyma Shapiro, whose gallery show on midlife mothering is on display at Hartford Seminary through September, organized the panel as a way to explore the similarities and differences among religions when it comes to motherhood. She explained in her introduction, however, that “all of these women are representatives of their doctrines, but can only speak for themselves.”

In their opening statements, the panelists discussed everything from the origins of their religions to how faith communities today deal with issues such as adoption, abortion, surrogacy, and in-vitro fertilization.

Pastor Stacie Harris Byrdsong of New Generation Christian Center Church in Hartford said her Christian tradition bases its doctrine on the Bible. An adoptive mother herself, she read a Scripture passage about adoption and called it a “tremendous blessing.” But for contemporary questions such as in-vitro fertilization not addressed in the Bible, she said, there isn’t always a clear answer.

Cantor Donna Gordon of Temple Sinai in Newington explained that Reform, Conservative and Orthodox Jews can have very different interpretations of religious law. Members of her Reform tradition, she said, leave decisions about reproductive rights, adoption and surrogacy up to the people involved. Rabbis in other traditions can have varying views, she said.

Debbie Humphries, a member of Hartford Monthly Meeting, New England Yearly Meeting of the Religious Society of Friends, explained that Quakerism embraced women ministers from its beginnings in England in the 1650s. Quaker mothers “had this critical role in making visible God’s spirit on earth,” she said. She also described the challenge of living that mission. “For every tradition there’s a tension between the ideology we hold and the way we put it into practice.”

Hana Saleh, a Muslim and a homeschooling mother, said Islam puts a “high status on motherhood,” because mothers provide unconditional love and care for their children. No matter how small and redundant the mother’s tasks, she said, she is honored for them. “Paradise is beneath the mother’s feet,” she said.

Malou G. Dusyn, an ordained lay Buddhist Minister who practices Tibetan Buddhism, said her faith has strong female figures who embody the qualities to which mothers should aspire, including wisdom and compassion. Her faith, she said, stresses that mothers be conscious and mindful when with their children. The faith also reveres the “divine spark” that exists in all of us. “We don’t own children,” she said. “We are guardians and we help them follow the path.”

A video of the full event can be viewed below.