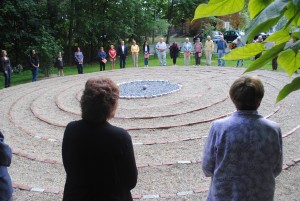 In addressing the crowd gathered for the opening of Hartford Seminary’s labyrinth, Academic Dean Uriah Kim called the structure a “gift to this community and to the community at large.”

The labyrinth, which is open to the public, was the brainchild of Prof. Miriam Therese Winter, who thought it would be well-used by classes and the public and would make a fitting tribute to her Medical Mission Sister companion of 47 years, Sister Mary Elizabeth Johnson. ME, as she was known, died in May at the age of 90 in the house that overlooks the labyrinth grove.

After Dean Kim’s introduction, Prof. Winter welcomed the crowd and talked about the intent of the labyrinth. The dictionaries she consulted, she said, defined a labyrinth as an “intricate combination of paths or passages in which it is difficult to find one’s way or to reach the exit.”

“They were all wrong,” she said. “Our commitment is to get the dictionaries to change the definition.”

The Hartford Seminary labyrinth, which sits behind the Women’s Leadership Institute building at 76 Sherman St., is modeled on a classical style that predates recorded history. It has seven levels around the center with a path that leads to the center and then away from it.

“You step onto the path, and one thing you can’t do is lose your way,” Prof. Winter said. “It leads you so you’re free to reflect within yourself. … Metophorically, spiritually, it invites you to center yourself.”

The classical labyrinth has no particular religious orientation, she said, so it can be used by everyone. She quoted from the book Labyrinths: Walking Toward the Center by Gernot Candolini. 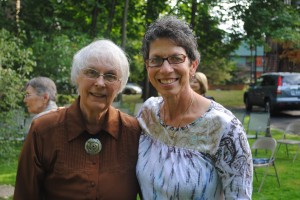 Prof. MT Winter, left, and Jeanne Pedane, who designed and built the labyrinth.

“The labyrinth is truly a symbol of all humanity. It knows no boundaries of age, skin color, or profession of faith. It reflects something of the deep truth of the universe in which we all live. The path is always the right one, even when one of its turns leads away from its center. To go through a labyrinth is to set out on a path of transformation. The labyrinth is capable of giving that which is inward an outward form. It invites us to strike out for the center and to find our way home.”

Prof. Winter thanked graduate student Jeanne Pedane, who designed and built most of the labyrinth, with help from her son, Hunter. She also thanked graduate student Charles Dionne, who helped with the work, and others who contributed funds, materials and labor. She then invited participants to circle the labyrinth and pray in seven directions, including East, South, West, North, to the sky, to the earth, and within. Many who attended then walked the labyrinth on their own.

The labyrinth, which will be included on the Hartford Blooms tour next June, has also been added to the Labyrinth Guild of New England website and the Worldwide Labyrinth Locator. 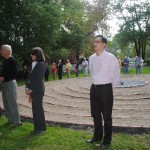 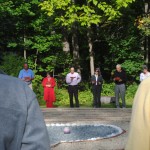 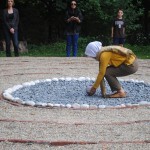 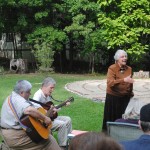 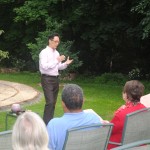 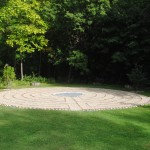 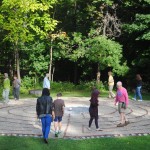 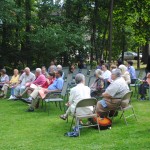