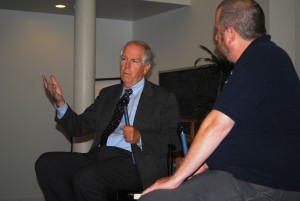 Author Alex Beam, a columnist for the Boston Globe and the International Herald Tribune, spoke at Hartford Seminary on Thursday, Oct. 2, about his new book, American Crucifixion: The Murder of Joseph Smith and the Fate of the Mormon Church. The talk was a Book/Mark presentation by the Mark Twain House & Museum.

Beam and Jacques Lamarre, Director of Communications for the Mark Twain House, had a conversation about the book and about the Mormon Church and its origins.

Beam said he considered himself “vaguely pro-Mormon” when he first began his research and left the process about the same. In the book, he details the story of 39-year-old Joseph Smith’s murder at the hands of a mob. At the time of his death in 1844, Smith was had founded a city in Illinois, was running for president of the United States, and had married more than 30 women in secret.

It was Smith’s “doctrine of polygamy” that “leads directly to his death,” Beam said. The doctrine is one that Mormons at various times rejected, embraced, then rejected again.