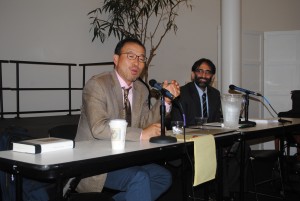 The event, which Hartford Seminary Dean Dr. Uriah Kim described as a “two for one deal on the topic of three in one” during his introduction, began with Dr. Lim presenting on his book Mystery Unveiled: The Crisis of the Trinity in Early Modern England. Dr. Lim’s discussion centered around three themes as they relate to the trinity: exegesis, tradition, and politics. Through these themes, Dr. Lim considered the history of debate and clashes between Trinitarians (those who subscribe to the doctrine of the Trinity) and Anti-Trinitarians (those who do not). Dr. Lim also shared his personal interests in Christianity and research.

This was followed by a discussion between the two lecturers and the audience. To watch/listen to the entire lecture, please see the media below.