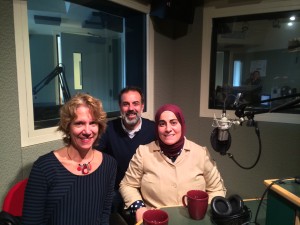 Prof. Feryal Salem was asked to appear on WNPR’s “Where We Live” program on Oct. 7, 2014, to talk about Muslim women. The program also featured Pam Tatge, Director of the Center for the Arts at Wesleyan University, who described Wesleyan’s year-long program called Muslim Women’s Voices. Hartford Seminary is a co-sponsor of that program.

Host John Dankosky asked Prof. Salem about common American misperceptions about Muslim women, and she talked about the great diversity among the 1.5 billion people who call themselves Muslim. Muslim women are just as complex and individual as “women of every other faith tradition,” she said. Many of the negative stereotypes about Muslim women are more cultural than they are religious, she said.

When Muslim women study Islamic scriptures and law, she said, they are empowered to challenge some of the cultural and regional biases against them. “Men and women are equal in Islamic scripture,” she said.

Dankosky asked both Prof. Salem and Pam Tatge to talk about the extreme views held by the group that calls itself the Islamic State or ISIS and whether that situation makes it more difficult to have a program about Muslim women this year.

“It’s all the more urgent to have this conversation,” Tatge said.

Prof. Salem was also asked what she would say to people to better educate them about the role of Muslim women in the world.

“Women are pretty much the same everywhere,” she said, pointing out that Muslim-majority countries have had seven women heads of state, while the United States has yet to have one. “There are places where their movements are limited, but much of what we see is cultural.”

Listen to the entire broadcast here!