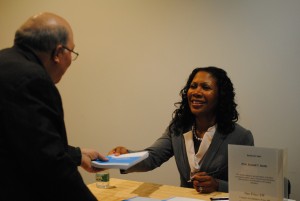 Hartford Seminary celebrated the debut of Prof. Shanell T. Smith’s first academic book on Thursday, Oct. 23, 2014, with a book talk and signing. The book, The Woman Babylon and the Marks of Empire: Reading Revelation with a Postcolonial Womanist Hermeneutics of Ambiveilence, is part of the Emerging Scholars series published by Fortress Press.

Prof. Smith told the audience that the book is the product of 4 1/2 years of doctoral work. She broke down the long title by explaining each word, including “Ambiveilence.”

Prof. Smith talked about the two scholarly conversations in which her book engages: One is feminist interpretation of Babylon in Revelation 17/18 and the other is African-American interpretations of Revelation in general. 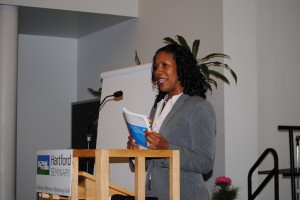 She pointed out that at the time of the publication of her book only four African-American scholars had published work on Revelation.

“My work adds a new perspective,” she said. “My aim is not to discount, disregard, or decrease the impact that [their work] has in Revelation scholarship, but rather to further the conversation, inspiring others in the process.”

The term “Ambiveilence” adds another dimension to the work, which Prof. Smith said was quite personal. It is a combination of two words: African-American intellectual W.E.B. Dubois’s concept of the “veil” – a state of double consciousness in which blacks are forced to see themselves through the eyes of white America, and postcolonial theorist Homi K. Bhabha’s term “ambivalence” – the simultaneous attraction to and repulsion from colonial power experienced within a single individual.

“With the insertion of one term into the other – ambi-veil-ence – I understand myself to be creatively interrupting the discourse of these men with each other, thereby creating and claiming a discursive space for women.”

Prof. Smith also talked about how the image of the woman Babylon reflects her own image. As a victim of Empire, the woman Babylon “calls to mind the oppression of slavery” and the continuing struggle of African-Americans to claim an equal place in American society. At the same time, she said, she is a privileged African-American woman who associates with and participates in Empire. This, she says, is her own “duality” and that she struggles with efforts to rend the veil that separates these two sides so that she can become her fuller self. A knowledge of what it means to be oppressed, plus access to people or platforms that can address oppressive systems, puts her in a powerful position to evoke change.