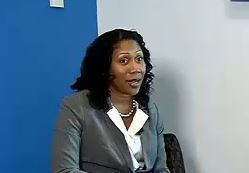 Sundlun’s new book, Finding Dad: From “Love Child” to Daughter, was released this month, and Sundlun has been featuring stories on the show about fatherlessness and forgiveness. Prof. Smith talked about her own experiences and about the power of forgiveness.

Prof. Smith’s debut book, The Woman Babylon and the Marks of Empire: Reading Revelation with a Postcolonial Womanist Hermeneutics of Ambiveilence, was mentioned on the show as well.