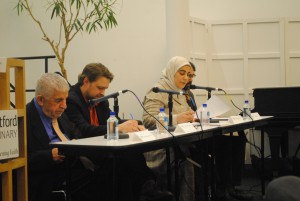 Hartford Seminary’s panel on ISIS: Its Roots, Its Influence, and How It’s Viewed by the Muslim World drew an interested audience and coverage from Connecticut’s largest newspaper.

The panel, moderated by Dr. Reza Mansoor, President of the Islamic Association of Greater Hartford, addressed the historical roots of ISIS, the reasons that Islamic law and Islam are contrary to its actions, and how the brutal, militaristic approach has managed to attract followers.

Prof. Mahmoud Ayoub, one of four faculty members on the panel, talked about the group’s beginning in 1999, and also about the historic underpinnings of Islam as both a state and a religion. “In my view, the movement of ISIS is not unique, nor is it outside the realm of Islam,” he said. “But it is based on an interpretation that goes against the principals of Islam. … What they are doing is against Islam and against the Islamic way.”

Prof. Feryal Salem took on the task of illuminating how ISIS’s actions and message are contrary to Islamic law. She cited an Open Letter to Al-Baghdadi, which was signed by more than 150 Muslim scholars. The letter goes point by point to explain how Islamic law not only differs from the views of ISIS, but expressly forbids many of its actions. In the question and answer section, Prof. Salem also discussed how the deterioration of the region’s system of education is to blame for the misinterpretations and misappropriation of Islam. “A little religion can be dangerous in any tradition,” she said.

Prof. Najib Awad, a Syrian Christian, spoke about ISIS on a more personal level and called himself an “intellectual activist in the Syrian revolution.” Prof. Awad said the media in the West has conflated ISIS in Iraq with ISIS in Syria, though they are two different things. He pointed out that the ISIS threat in Syria has been going on for at least two years, whereas the West only woke up to it recently when the group began beheading foreign journalists. The people in Syria, he said, are being bombarded and killed by the regime of Bashar al-Assad, as well as attacked by ISIS. “The world was not paying attention to this at all,” he said.

Finally, Prof. Timur Yuskaev spoke about ISIS from an anthropological point of view, referring back to the U.S. decision to invade Iraq and the fallout of that decision. He also talked about nationalism, and how ISIS might have influence with some Muslims who feel like outsiders in their home countries. “It’s as though being Muslim corresponds to some kind of sense of nationalism,” he said. “It offers a strange, vacuous, virtual sense of belonging. It’s a complete kind of mirage. They can romanticize is any way they want, because they’re not there.”

For the Hartford Courant’s coverage of the panel, click here.

The full video of the panel can be found below.