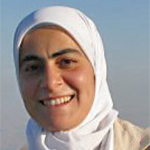 Dr. Feryal Salem delivered a lecture entitled “Muslim Women: Drawing From the Past to Move Forward in the Future” at Wesleyan University’s Office of Religious and Spiritual Life and Allbritton Center for the Study of Public Life. The Wesleyan Argus stated “Dr. Salem emphasized the importance of having Muslim women’s voices included in Islamic scholarship. Salem spoke to the empowerment of Muslim women, stating that the most effective way for them to contribute to the direction of their own faith is to become educated within Islamic scholastic tradition itself. In this way, they will have the power to reframe the way Muslim women are spoken about as well as their roles in society.” A complete recap of her lecture can be found in the Wesleyan Argus.

Dr. Salem was also quoted in the Hartford Courant as the Hartford Seminary and Muslim communities around the globe mourned the death of three victims in the Chapel Hill shootings last week. “These people have humanized who Muslim Americans are,” said Feryal Salem. “They had fun, they danced, they played basketball, they could do the Harlem Shake,” she said, referring to a video posted to the Internet of Barakat doing the popular dance at his wedding in December.

Prof. Scott Thumma’s research on megachurches, specifically how many megachurches are in each state, was used in a recent Vox.com article. “If this group of churches were a Protestant denomination,” writes Thumma, “it would be the nation’s second largest such group.” The article explores how many megachurches are in each state. The research was also used in a piece in The Tennessean, outlining that Tennessee leads the nation in such churches. The same research was used in Christianity Today’s Morning Roundup on February 10th.

Thumma was also quoted in a Houston Chronicle piece on African evangelist Reinhard Bonnke. The “fiery evangelist” is on a speaking tour with a two-night stop in Houston; the article does some exploration into whether or not Bonnke will be quite as popular in Western cultures as he is in Africa. “It is hard to say whether his message – a dualist message of good versus evil – demon possession and hell fire in a large public rally setting will work in the current cultural context of the U.S. and the in the age of the Internet,” said Scott Thumma, a sociology of religion professor at Connecticut’s Hartford Seminary. The entire article can be found here.

Prof. Yehezkel Landau took part in a symposium in Atlanta on February 18th entitled “Compassion and Leadership in a Multi-Faith World”; the symposium was co-sponsored by Emory University and Georgia Institute of Technology. For the symposium, “compassion” was the critical lens. The panelists shared expertise and experiences based on their own work and also drew forward impressions and insights to illuminate the impacts and consequences of these topics. Panelists took into account perspectives such as: personal/group identities; the histories, preferences, and practices of various faith traditions; the implications of ethical and social responsibility and cultural awareness; and available evidence of passion/compassion as leverage for effective and sustainable action.

“Compassion and Leadership in a Multi-Faith World” is envisioned as the first of three symposia (Spring 2015, Fall 2015, Spring 2016) presented by the Leadership and Multi-Faith Program (LAMP), all of which will focus on the intersections of faith, leadership, and civic action. Each symposium will identify a specific lens through which to interrogate challenges and opportunities at these intersections. In addition, each forum will inform the agenda for subsequent LAMP activities and guide the development of a matrix of strategic actions in research, education, and cross-community civic engagement.

Dr. Shanell T. Smith has been invited to speak at Lafayette College in Easton, Pa. on February 25th for a lecture titled “Doubly Marked in the American Empire”: Considering the Experiences of an African American Woman Reading Revelation. By considering issues of empire and the experiences of African American people, the Rev. Dr. Shanell T. Smith will highlight the woman Babylon’s simultaneous identification as a “brothel slavewoman” and as an “empress/imperial city.” This two-sided characterization of the woman Babylon incites tension within Dr. Smith because she reflects ever so sharply her own continual conflicting reality of being simultaneously a victim of, and participant in, empire. In today’s troubling times, Dr. Smith hopes that these conflicting realities will lead not to paralysis or neutrality, but to action.  The event is part of Black Heritage Month and is sponsored by the college’s Office of Religious & Spiritual Life, Office of Intercultural Development, Africana Studies, Women’s & Gender Studies, and Religious Studies.

On February 21st, Dr. Lucinda Mosher will be in Columbus, Ohio as a consultant to the Episcopal Diocese of Southern Ohio on the Episcopal Church’s theology of interreligious relations. On Sunday, February 22nd,  Dr. Mosher will be the guest preacher at Trinity Episcopal Church in Columbus.  At the end of the month (Feb. 28th), she will be a panelist for a workshop on “Next Steps in Episcopal interfaith Relations” at the Consortium of Endowed Episcopal Parishes Conference in Amelia Island, Florida. The Panel includes discussion:  “As 21st-century Episcopal congregations, we find ourselves down the street not only from other churches, but also from synagogues, mosques, and temples. How can we better understand, appreciate, and work with people of other faiths? What might we learn about ourselves in the process? This panel discussion focuses on interfaith relations on both the national and local level. Hear fascinating stories, explore practical steps for parish engagement, and participate in a conversation that is both timely and crucial.”