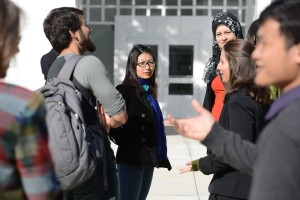 The website Inside Philanthropy posted an article, “Philanthropy and the Fight Over Muslims in America,”  this month that described the mistrust between Christians and Muslims, and pointed to Hartford Seminary’s new Peacemaking Fellows Program as one significant effort to reverse it.

“Relations between Christians and Muslims, historically complicated, have grown increasingly tense in the United States in the years since the September 11 terrorist attacks in 2001. Lately, things have gotten especially bad. Issues including the Boston Marathon bombing, the Charlie Hebdo killings in Paris, the rise of the Islamic State terrorist group, and the status of women under Sharia law have led to low levels of trust of Muslims among Americans.

“Data from the Pew Research Center found that Muslims ranked even lower than atheists among groups that Americans viewed positively. While 41 percent of Americans indicated they viewed atheists in a positive light, only 40 percent reported holding a favorable view of Muslims. …

“Meanwhile, we recently learned about a New England seminary that wants to do its part to foster better relations between Christianity and Islam, and how it just received some help in doing so from the Arthur Vining Davis Foundations. The Florida-based funder recently awarded $130,000 to the Hartford Seminary in Connecticut for a new fellowship program focused on Christian-Muslim relations.

“The Hartford Seminary Peacemaking Fellows program is a one-year, expenses-paid fellowship for young Christians with leadership potential and an interest in peacemaking and interfaith relations. Participants in the program spend a full academic year immersed in interfaith dialogue, conflict transformation, and leadership skills. They also reside in on-campus interfaith housing.

“Hartford Seminary is well positioned for this type of program. Since 2004, the seminary has operated its International Peacemaking Program (IPP) for students from countries torn by religious conflict. IPP has hosted Christian, Jewish, and Muslim students from such countries as Israel, Nigeria, Indonesia, Pakistan, India, and Iraq. The new Peacemaking Fellows program funded by the Davis Foundations provides a way for American students to participate in IPP and foster Christian-Muslim dialogue in American cities. What’s more, the seminary also offers a graduate certificate in Islamic Studies and Christian-Muslim Relations.

“Leaders produced by the Hartford Peacemaking Fellows program will have their work cut out for them, as many U.S. Christians perceive Islam as a political, as well as religious, threat. Both faiths also have viewed attempts at dialogue with mutual suspicion, with many Muslims seeing it as a covert crusade against Islam, and many Christians viewing dialogue as naïve exercises that fail to confront threats of perceived fanaticism.”