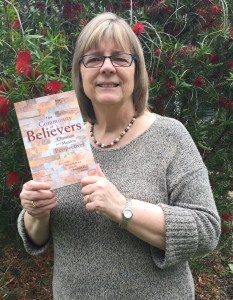 Prof. Lucinda Mosher has a new book out! The Community of Believers: Christian and Muslim Perspectives from Georgetown University Press was edited by Prof. Mosher and David Marshall (Duke Divinity School). This is the latest volume of proceedings of the Building Bridges Seminar — an annual scholarly dialogue.

Prof. Yehezkel Landau joined a podcast conversation for the Huffington Post in a feature titled Living While Jewish: Fighting Antisemitism and Hate in the 21st Century. Prof. Landau stated that the recent upswing in antisemitism is largely political but may also stem from isolation among faith communities. He also spoke of the “Open House in Ramle” which is a building that houses both Jewish and Arab families in Israel.

Prof. MT Winter spoke at the United Nations on March 18 at the 59th Session of the UN Commission on the Status of Women. The presentation was titled Women’s Spirituality – Pioneering and Transforming; Spirituality for Women to Make Peace in Our Contemporary World and was sponsored by the Medical Mission Sisters.

Prof. Scott Thumma was quoted in a Religion News Service article published in the Huffington Post on March 3, 2015, about evangelical pastors who have changed their minds on LGBT issues. The article, Evangelical Churches Grapple with LGBT Inclusion, talks about the benefits and costs to pastors who decide to embrace the LGBT community. Prof. Thumma, who has studied both homosexuality and megachurches, said gay Christians want to be accepted by the churches in which they were raised. “To be an evangelical Christian is more than the theology. It’s the tradition you were raised in, the songs and hymns you sang as a kid,” he said. “There’s a pull to the expression of Christianity they grew up with, where they feel at home and where they feel the deepest connection to God even if the theology said they didn’t belong there.”

The Charlotte Observer quoted Thumma extensively in its recent piece about the exponential growth of Elevation Church, which started at 121 worshipers and now has over 17,000 members in 13 locations. Thumma discussed reasons for the growth and how the megachurch will handle the eventual plateau of membership.