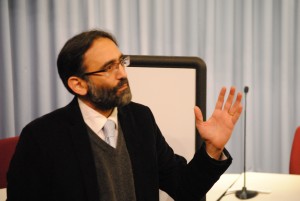 Prof. Scott Thumma was quoted in an article relating to Franklin Graham’s use of social media to pray for Supreme Court Justices and their vote on same-sex marriage. The article, in Religion News Service on May 20th describes Graham’s efforts to plead for prayers for the justices. “Social media, and Facebook in particular, has become a powerful pulpit,” said Thumma. “The Graham clan has long understood the power of the media. With nearly 1 million likes on Facebook and a quarter of a million followers on Twitter, Franklin Graham can inexpensively influence and incite his followers without the infrastructure his father required to persuade the masses,” Thumma said.

Professors Najib Awad, Lucinda Mosher and Feryal Salem participated in the 14th annual Building Bridges Seminar–an international dialogue of Christian and Muslim scholars, which met May 3rd – 6th at Georgetown University’s School of Foreign Service-Qatar. This year’s topic was “Human Action within Divine Creation: Christian and Muslim Perspectives.” There were 33 participants in the program and Prof. Mosher isthe Assistant Academic Director of the initiative.

Prof. Scott Thumma was quoted at length in an article by the Boulder Daily Camera titled “Cities Struggle to Balance Economic Development with Growing Churches”. The article highlighted the recent trends of growing megachurches across the country and their impact on municipalities. Some of the issues cities are facing were from lost tax revenue, shifting of jobs as churches expand to larger buildings, and protecting open space areas. “Towns and counties don’t necessarily want to be seen as repressing religious freedom, but they also have to protect the quality of life and sensitive wilderness areas and also generate an expanding tax base,” Thumma and co-author Dave Travis wrote in their 2007 book, “Beyond Megachurch Myths.” The article says megachurches in some areas, such as Lafayette, Colo. have had a very positive impact on the community from charitable donations to revitalizing surrounding areas.