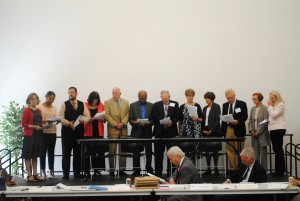 Five new trustees have joined the board at Hartford Seminary for three-year terms. The new trustees were welcomed during the Annual Meeting of the Corporation on May 11, 2015.

Edmund (“Ted”) M. See is from Marietta, OH, but now lives in Hartford. A graduate of Wesleyan and Harvard, he went on to become a partner at Day, Berry & Howard, which later became Day Pitney LLP.  See practiced in the area of state and local government and finance, including representation of governmental agencies issuing general obligation and revenue bonds, and representation of borrowers, lenders, underwriters, trustees and issuers of private activity bonds. He also represented banks and insurance entities which provided credit support to bond issues. He retired from the practice in 2011.

A Hartford Seminary Corporator since 1994, he is looking forward to joining the Board of Trustees. He is also a member of Leadership Greater Hartford, Hartford Audit Commission, and was the chair of the Connecticut Bar Foundation.

See lives with his wife Ellen and has three sons, Kevin Gregory, and Tyler. He is a member of St. Patrick – St. Anthony Church in Hartford.

Wendy B. Grammas is a former financial executive at major multinational corporations.  Grammas received a BA from Wellesley College and an MBA and MIA (Master of International Affairs) from Columbia University.

Grammas was a member of the Board of Trustees of the Hartford Seminary from 2004 to 2013. During her nine years as a Trustee, she served on such committees as the Investment Committee, the Finance Committee, and the Facilities Planning Committee.

Dr. Ali Shakibai was born in Iran and earned his M.D. degree from Tehran Faculty of Medicine. He came to Cincinnati, Ohio, in 1968 and completed his medical internship in The Christ Hospital.  He has been practicing Internal Medicine and Clinical Cardiology in Manchester since 1973.

Dr. Shakibai is a member of several medical associations including Physicians for Social Responsibility and Doctors Without Borders. He has served as a member of many committees at Manchester Memorial Hospital.

Dr. Shakibai has enjoyed innumerable educational programs since he arrived in Connecticut in 1973. He has been a Corporator for many years and is looking forward to being a member of the Board.

Imam Yahya Hendi is the Muslim chaplain at Georgetown University, the first American University to hire a full-time Muslim chaplain. Imam Hendi is a Public Policy Conflict Resolution Fellow of the Center for Dispute Resolution of the University of Maryland School of Law and the Maryland Judiciary’s Mediation and Conflict Resolution Office. Imam Hendi is the founder and the President of Clergy Beyond Borders. He also serves as a member of the Islamic Jurisprudence Council of North America. He has served as an adjunct faculty member for Zanvyl Krieger School of Arts and Science and Osher’s Lifelong Learning Institute of John Hopkins University, and Fordham.

Mr. Hendi’s undergraduate education was in Islamic Studies and his graduate education was in comparative religions with interest in Christianity, Judaism, comparative religions and inter-religious dialogue and relations. He has written numerous publications on many topics, including women in Islam, women and gender relations in Islam, the second coming of the Messiah, Islam and biomedical ethics and religion and Islam in the United States.

A sought-after speaker, Imam Hendi has presented a multitude of interfaith and general lectures in the USA, Asia, Africa, Europe, central Asia, Eastern Europe, Australia and the Middle East over the past 14 years and he has been to more than 63 countries and 41 US states for conferences. Mr. Hendi was one of the Muslim leaders who met with President Clinton during his Presidency. He also met with the President Bush in the aftermath of the September 11th tragedy and continued to meet him many times during his presidency. He 2009, he  met with President Obama at the White House.

Imam Hendi often visits and lectures at churches and synagogues hoping to create a new positive relationship between the followers of the three Abrahamic religions.

Imam Hendi has appeared on many national and international television and radio shows as an expert on interfaith dialogue and on Islam and Muslims (i.e. CNN, ABC, Fox, Kuwait TV, Nile TV, Pakistan Channel-II, RAI, MSNBC and Al-jazeerah).

In May 2002, Imam Hendi was chosen by Hartford Seminary to receive its annual James Gettemy Significant Ministry Award for his work to promote peace building between people of different religions. In February 2009, the FBI honored Imam Hendi with the National leadership Award for fighting terrorism, drugs and violence in America. In 2012, Imam Yahya Hendi was named as one of the world’s 500 most influential Muslims for his work as an interfaith dialogue activist and trainer.

Rabbi Debra Cantor is the spiritual leader of Congregation B’nai Tikvoh-Sholom in Bloomfield, CT. Earlier, she served as rabbi of the historic Kane Street Synagogue in Brooklyn, NY, and Congregation Tifereth Israel in Andover, MA.

A member of the first Jewish Theological Seminary Rabbinical School class to include women, Rabbi Cantor was ordained in 1988. She graduated from Brandeis University with a BA in Near Eastern and Judaic Studies.

Rabbi Cantor has an extensive background in Jewish education, with particular expertise in adult learning, teacher training, synagogue change, leadership development, and Jewish outreach. She served as executive director of Camp Ramah in New England and as an education and synagogue consultant for the Bureau of Jewish Education of Greater Boston and Adjunct Lecturer at Hebrew College.

Rabbi Cantor has lectured widely and has contributed articles to several publications. She is an Adjunct Lecturer for Hartford Seminary’s “Building Abrahamic Partnerships” program and is a member of the board of the CT Council for Interfaith Understanding. Since 2009, Rabbi Cantor has worked with Christian and Muslim colleagues to develop and teach a model religion curriculum at the Covenant Preparatory School in Hartford. She also teaches at the Jewish Teen Learning Connection of Greater Hartford. Rabbi Cantor is an active member of the board of the Jewish Community Relations Council and serves as rabbinic advisor for the Women’s Philanthropy division of the Jewish Federation of Greater Hartford.