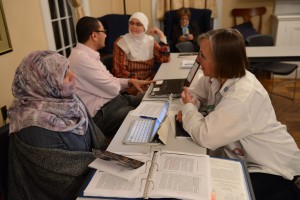 Hartford Seminary’s unique approach to interfaith dialogue was featured on May 2 as the lead story on the Huffington Post Religion page. The article talked about the International Peacemaking Program, the Building Abrahamic Partnerships class, as well as the Seminary’s approach to housing students of different faiths.

The article opens with this anecdote:

“When Doaa Baumi arrived on Hartford Seminary’s campus in Connecticut to study interfaith dialogue, she was asked to live with a Roman Catholic roommate. Baumi, an Egyptian Muslim, had eagerly soaked up information about Judaism and Christianity while studying religion as an undergrad at Cairo’s Al-Azhar University, one of Sunni Islam’s most prestigious schools. But this was the first time she had ever shared a living space with an a Catholic — nevermind an American. And, she admits, she came into the situation with stereotypes in her mind. During those early days of communal living, Baumi remembered nervously telling her roommate that she needed to wake up early to say her morning prayers. They lived in a wooden house with squeaky floors, and she was worried that her roommate would be annoyed to be awoken at 5 a.m. The response she got from the roommate surprised her — and set the tone for her year at Hartford Seminary. ‘She asked me to wake her up as well, so that we could pray together,’ Baumi recalled. ‘So we tried to wake up together. I prayed and she prayed. And it was awesome.’

In addition to interviews with a number of International Peacemaking students, Huffington Post spoke with President Heidi Hadsell, who talked about the growing need for religious leaders to acquire interfaith dialogue skills.

“People in their congregations are increasingly living in interfaith families and having interfaith experiences, and they’re turning to their pastor, priest, rabbi, or imam for guidance,” President Hadsell told The Huffington Post. “Our religious leadership needs to be able to guide their parishioners and congregations through the questions that are posed by life in the United States today, which is increasingly pluralistic.”