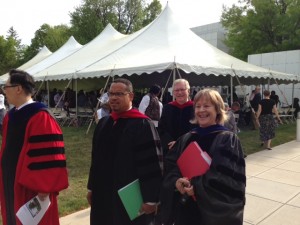 Hartford Seminary awarded diplomas to 64 graduates on Friday and heard a stirring address from U.S. Rep. Keith Ellison of Minnesota, who also received an honorary Doctor of Divinity. Rep. Ellison, a Democrat, represents Minnesota’s 5th District, which includes Minneapolis and is one of the most ethnically diverse districts in the state.

Rep. Ellison began his address by talking about a hypothetical couple in America. “They haven’t seen a raise in a long time,” he said. “They’re wondering, are we going to be able to pay the rent or the mortgage.”

This couple, he said, is likely to turn to their faith in times of difficulty.

“This couple is going to look to you,” he told the Seminary graduates. “You might feel down, but if you are the pastor or the chaplain, you can’t show it. … We all have to be concerned about that couple.”

Rep. Ellison talked about the “myth of scarcity” in the United States, that there isn’t enough to go around.

“The people are not just units of production, they are souls, they are spirits,” he said. “They are made in the image of God.”

Raised as Catholic, Rep. Ellison converted to Islam and was the first Muslim elected to Congress. He talked about the New Testament story of the loaves and the fishes, and said that among many theories on how the food multiplied, maybe Jesus’ disciples underestimated what they had to feed the multitudes.

“What if the world we live in today, there’s actually a lot,” he said. “The United States of America has never been richer than it is at this very moment. What if there’s radical abundance if we only had a spirit of generosity.”

Rep. Ellison also talked about the Prophet Mohammad, who was born very poor. “My point is that in every tradition the orphan, the widow, the poor have to be blessed in the eyes of the believer.”

So how do we change the dynamic of the income disparity that has grown exponentially in the last few decades?

“You’ve got to believe that something good can happen. We’ve got to get out of our narrow confines,” he told the graduates and their families. “What you supply to the equation is the faith.”

“Faith says God has big plans, no matter what day of the week you pray on,” he said. “People like me, politicians, we will listen, and let me tell you why: Politicians see the light when they feel the heat. … I want the faith communities to tell me — this is what we expect of you.”