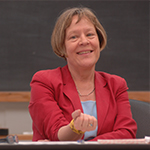 With the backing of the Henry Luce Foundation, Hartford Seminary is taking the lead on a project called “The Current State of Interfaith Education in the United States.”

President Heidi Hadsell traveled to New York City on Sept. 21, 2015, to meet face to face with leaders of various institutions that work on the interfaith front. Those leaders were asked to contribute to a collection of reflections on the current state of interfaith education. Eventually, that collection will be published.

“The goal of the project is to qualitatively assess the history, practices and effects of the growing focus of interfaith education and action in the United States,” President Hadsell wrote to the participants.

In its proposal to the Luce Foundation, Hartford Seminary wrote that the “objectives of the project include assembling an historical understanding of the emergence of interfaith education in the United States, in all its varieties, from a range of perspectives; describing the varieties of institutional approaches to creating and expanding these programs; identifying and articulating the most cogent critiques of interfaith education from the academy, from nonprofit organizations, and from (primarily) Christian, Muslim and Jewish religious communities; and summarizing the trends, challenges, outcomes and outlooks for this emerging field.

In addition to the collection of reflections, the project will also contribute to the production of a working paper that will map the current landscape of interfaith efforts.