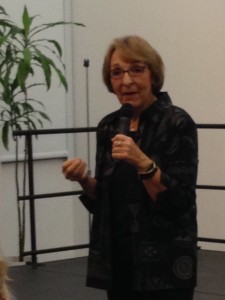 A standing-room-only crowd greeted Nancy Ellen Abrams, who came to Hartford Seminary on Sept. 14 to talk about her new book, “A God That Could Be Real.”

Nancy Abrams, a philosopher of science and a lawyer, has been immersed for many years in new ways of thinking about the universe along with her husband, Joel Primack, a professor of physics and one of the astrophysicists who has created a new theory of the cosmos. The two have co-authored several books that describe the cold dark matter making up most of the universe, while the visible matter we see is just one small fraction of it.

Nancy wasn’t troubled by the lack of God in these groundbreaking models until she entered a 12-step program for eating disorders and realized that, as an atheist, she had no way to connect with 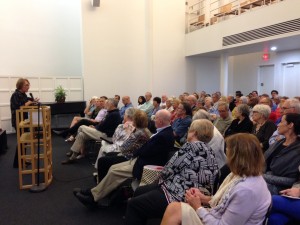 the higher power that was supposed to help her with her struggle. That got her thinking.

“I had this sinking feeling that I had never really tried to understand God,” she said.

The outcome of her effort to understand God is detailed in her book. She had to ask herself, “Can anything actually exist in the universe as science understands it that is worth of being called God.”

Her answer came through the idea of emergence, which is something she described as a “new and radically unpredictable” entity that arises out of a collective. One example was the complex global economy that arose from local buying and selling, and another was the way a swarm of ants can build an anthill even as no one individual ant can understand how that might be done.

God, she believes, is a phenomenon that emerges from our collective human aspirations. “We need to redefine God,” she said. “The emerging God is not king of the universe, it’s humanity’s bridge to understanding the universe.”

The full video of this talk and the Q&A that follows can be viewed below.