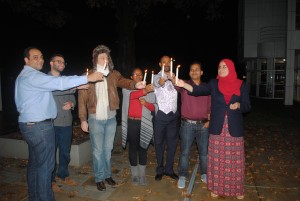 Hartford Seminary has launched a #GivingTuesday campaign to raise scholarship money for the International Peacemaking Program. The campaign, which asks donors to contribute $50 each toward a peacemaking scholarship, will culminate on Dec. 1 (the Tuesday after Thanksgiving).

According to its website, “#GivingTuesday is a global day of giving fueled by the power of social media and collaboration. Observed on the Tuesday following Thanksgiving (in the U.S.) and the widely recognized shopping events Black Friday and Cyber Monday, #GivingTuesday kicks off the charitable season, when many focus on their holiday and end-of-year giving. Since its inaugural year in 2012, #GivingTuesday has become a movement that celebrates and supports giving and philanthropy with events throughout the year and a growing catalog of resources.”

The groundbreaking International Peacemaking Program was initiated in 2004, and has since brought more than 40 young leaders from countries where there is interreligious conflict for a year of study and peacemaking practice.  Graduates of the IPP have returned home and are making a real difference in places like Nigeria, Indonesia, Iraq, Pakistan, the Philippines, Iran and India.  Through grants from private foundations, communities of faith, and individuals committed to peace, the Seminary offers a limited number of annual IPP scholarships to Christian, Muslims and Jews, which attract qualified, committed candidates from around the world.

In 2015, the IPP expanded to include two Plowshares Peacemaking Fellows for three years funded by generous donations from the Plowshares Institute. The Arthur Vining Davis Foundation has funded two additional scholarships for three years that go to American Christian peacemakers. That brings the total number in 2015-16 to seven, and the Seminary would love to increase that number.

The #GivingTuesday campaign is asking donors to contribute $50 toward a scholarship. It costs approximately $25,000 to fund an IPP student for a year of study at Hartford Seminary, so just 500 donors at $50 each will help us to train another peacemaker for life!

The theme of our #GivingTuesday campaign is #PassTheLight of Peace. We encourage everyone to post a photo of themselves holding a candle on social media, tagging @hartsem and using #PassTheLight.

Watch the video of our IPP students passing the light of peace, and please share widely.