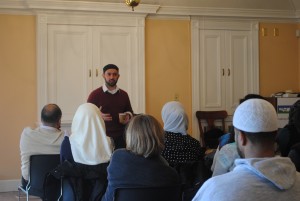 Imam Khalid Latif has many jobs: Executive Director and Chaplain for the Islamic Center at New York University; Chaplain for the New York City Police Department; businessman. He has been invited to speak around the world and has been featured on media outlets from BBC and CNN to the New York Times, and he is the subject of the Chelsea Clinton-produced film “Of Many” about his close relationship with an Orthodox Jewish rabbi at NYU.

But on Monday, he was one chaplain speaking from the heart to chaplains and chaplains-in-training about the difficult time that Muslims are facing in America today.

He advised students to practice forbearance and to stay positive in the face of negativity as they go about their work in hospitals, prisons, on college campuses or in the military. He also asked them to think about what they could do from the “framework of reality” instead of the “framework of equity.”

If you have anger, confusion and frustration inside, he said, that is what you will give to others.

He talked about the students and community members who come to see him every day, asking questions and revealing their troubles. He asks them two questions that he advised the chaplains to ask themselves: What is it that guides you? And how do you take care of your heart?

Chaplains need to take care of their own hearts in order to help others, he said.

He also advised focusing on building institutions that “set a different standard for the generation to come.” That might mean breaking out of the bubble of Muslim student groups and institutions and going places where “there have never been Muslims before.”