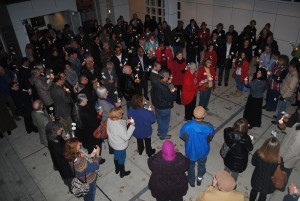 Many were moved to tears at a student-organized Interfaith Prayer Vigil for Peace and Unity held at Hartford Seminary on Wednesday, Dec. 16.

The emotional and inspiring evening began with a welcome from President Heidi Hadsell. She talked about the importance of coming together to “show our common hope in a conflict-filled and often violent world.”

President Hadsell said the vigil was the work of a group of Hartford Seminary students who, while they sometimes despair, wanted to do something public and positive.

“The students we teach and others like them embody hope for a future of peace,” she said.

Nicole Corerri, one of the primary organizers, said students chose the theme and hashtag #bringinglighttodarkness as their response to gun violence, police brutality, shunned refugees, terrorist acts, and the subsequent fear and hateful backlash towards American Muslims.

“We must remember all humanity that’s suffering,” she said.

She asked that those present stand against backlash and bigotry, and find ways to bring hope to the world.

“In times like this we must redouble our efforts, challenge ourselves to live up to our professed ideals,” she said. “There is work to be done, and we are the ones to do it.”

Student Nargis Alizada read from a number of emotionally charged letters written by victims or family members of recent attacks, including one from the husband of a woman killed in Paris who told terrorists in a Facebook post: “I will not grant you the gift of my hatred.”

Student Andrew Luisi, who described himself as a “straight, white American male from a middle-class family,” talked about the transformative experience of listening to his fellow Muslim students describe the fear and trauma that can affect them daily. “I shared in the pain,” he said, “stripped of at least some of my privilege.”

Student Madiha Bhatti recited a powerful original spoken word poem about the “selective memory” of America, and students closed the night with a group song, “Lean on Me.”

As they exited, students handed each participant a flower with an accompanying message of peace and a candle. The crowd gathered with their lighted candles in the courtyard for a final moment of reflection. 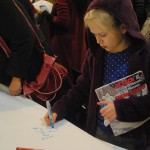 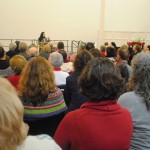 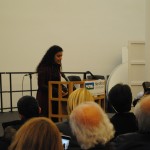 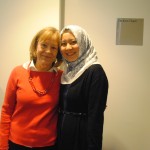 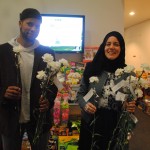 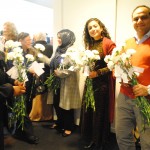 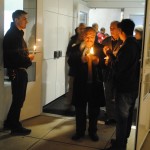 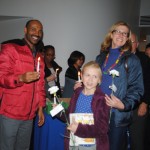 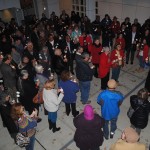