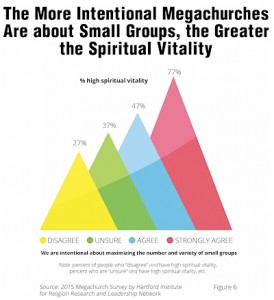 A report released on Wednesday, Dec. 2, 2015, by the Hartford Institute for Religion Research (HIRR) shows that megachurches continue to grow in popularity across the United States. But they are facing some of the same challenges as smaller Protestant congregations in attracting young people and members who are committed long-term.

The entire report, co-authored by Prof. Scott Thumma and Dr. Warren Bird, can be found at this link on the HIRR website.

Reporters around the country are already writing about the report, which was based on a large survey conducted earlier this year. Megachurches are defined as those with at least 2,000 people in weekend attendance.

Religion News Service posted a Dec. 2 story titled “The Megachurch Boom Rolls On, But Big Concerns Are rising Too.” In it, Prof. Thumma talks about the drop in individual attendance to once or twice a month — or less.

“They think ‘regular attendance’ is ‘I get there when I can,’” he said.

“We found many of these large, successful congregations still have many of the same challenges of smaller congregations. They are not immune to the cultural dynamics in society,” Thumma 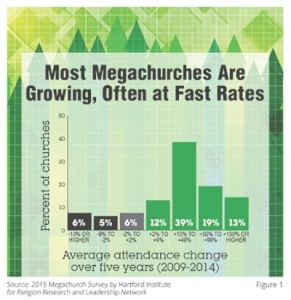 said. “Everyone is trying to attract new people and hold on to them and make them disciples. But, today, people are seekers and shoppers looking for a temporary experience of worship, not a long-term commitment.”

Among other findings, Thumma said there has been a shift outward for many of these churches.

“For a very long time, the focus of megachurch programming was inward — taking care of our own people. Now there’s a huge shift to outreach: 43 percent said global missions were a specialty of their congregations, and 44 percent said one of their specialties was community service and helping those in need.”