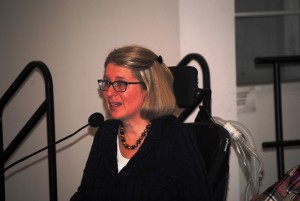 The Rev. Nancy Butler came to Hartford Seminary on January 12 to deliver a talk titled “God, a Struggling Church Plant, and ALS.” The former Hartford Seminary student and trustee spoke with honesty and openness in the face of a terrible disease, even how that disease has had a positive impact in many ways.

“As you know, I have ALS and will probably die this year,” she said at the outset. “What you might not know about me is what I pray for.”

The Rev. Butler said she was very religious as a child, prayed a lot, and wanted to become a missionary. As an adult, she searched for a long time for churches where she would feel at home, but ultimately decided to start her own, Riverfront Family Church in Glastonbury, a rare breed that is both progressive and evangelical.

Her husband, Gregory Butler, spoke about how his wife, who has an MBA in marketing, approached founding a church in 2007 “in the same way as launching a business.”

“She hired a director from Hartford Stage,” he said. “We have a projector that looks like a phaser from the Star Trek Enterprise.”

She was working 80 hours a week developing “Disney-level” performances for Sunday worship, but after five years, she realized that the church was a “failure” and that she had come to the end of her rope. She fasted during Lent, prayed about it and finally “surrendered it to God.” In response, she said, God drew her attention to a Bible story with the message that she shouldn’t carry the burden by herself.

After that, she called in the church board and “changed the whole culture,” using more volunteers and finding ways to delegate tasks. The church began to hold its own and draw new members. Not long after that, she saw the first signs of what would later be diagnosed as ALS.

Her illness, she said, has forced her to give more over to the people around her and to look at her life with a different perspective.

“My faith has skyrocketed since I got my diagnosis,” she said. “In suffering, we come to know Christ.”

The entire program can be seen below.