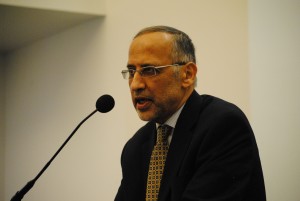 Dr. Liyakat Takim of McMaster University in Ontario gave a talk Tuesday evening on Islamic law, how it evolves depending on the surrounding culture, and how that evolution particularly applies to Muslims living as minorities in the West.

Dr. Takim first made the distinction between “Shariah” and “fiqh.” All Muslims share the same Shariah, he said, derived from the text of the Qur’an and the Sunnah, which is based on the words and actions of the Prophet Muhammad. But “fiqh,” or the human understanding of Islamic law and how it can be applied, he said, is based on cultural norms of the time and the assessment of “reasonable people and other legal precepts.”

Thus, the fiqh of those living in the minority may be “very different than in countries where Muslims are in the majority,” he said.

Dr. Takim talked about the development of Islamic law and how “custom and law are deeply intertwined. If law ignores the social norms, it becomes irrelevant.” He gave several examples of instances where Islamic law changed based on the customs of the time and place it was being interpreted.

Muslims must “speak up,” he said, against the old paradigms that have a “strong patriarchal ethos” and look to the spirit of the Qur’an rather than the specific cultural practices of when it was written in 7th century Arabia.

“Based on this, we as Muslims in the West can use the behavioral patterns of people of reason, as long as it doesn’t violate the ethical framework of the Qur’an.”

He gave the example of traditional law that says a woman can inherit a portion of her husband’s wealth and a house, but not the land on which it sits.

“We need to learn from history,” he said. “We cannot limit God to 7th century Arabia.”

This talk was presented by the Imam Ali Chair for Shi’a Studies and Dialogue among Islamic Legal Schools at Hartford Seminary. Watch the full video of Dr. Takim’s talk here.