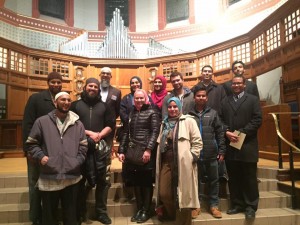 The Pillars Fund, a donor-advised fund founded in 2010 to foster civic engagement and promote a better understanding of the American Muslim community, has awarded a grant of $25,000 to Hartford Seminary’s Islamic Chaplaincy Program.

The grant includes $15,000 for student activities and events and $10,000 for scholarships. The activities will include inviting scholars, activists and leaders in the Muslim American community for weekend seminars, retreats or evening events that will expose Islamic Chaplaincy students to a wide variety of ideas and individuals.

“The Pillars Fund is honored to begin our partnership with Hartford Seminary. It is our privilege to support your work,” Kashif Shaikh of the Pillars Fund said.

Plans are under way to bring in several well-known authors, speakers and theater artists for the fall semester.

“Hartford Seminary is grateful to the Pillars Fund,” Prof. Feryal Salem, co-director of the program, said. “The grant will allow us to make our already exceptional Islamic Chaplaincy program even stronger by enabling us to offer extracurricular events that will be an important part of the student campus experience.”

Hartford Seminary was among the first American institutions to give serious attention to the study of Islam and to forming connections to the Muslim world as early as 1893. Over the past century, Hartford Seminary has maintained its pivotal role in building bridges of mutual respect and cooperation between Muslims and Christians.