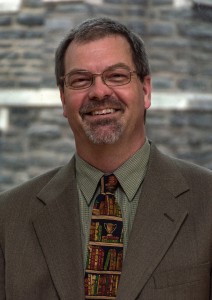 The Macdonald Center, the oldest center of its kind in the nation, embodies the Seminary’s commitment to the study of Islam and Christian-Muslim relations, which goes back more than 100 years.

“Dr. Grafton’s experience, work and scholarship amply demonstrate his deep and extensive interest in Christian-Muslim relations and his appointment will enhance and complement the faculty of the Macdonald Center in particular and the Seminary as a whole,” Dr. Uriah Kim, Academic Dean of Hartford Seminary, said.

Dr. Grafton is Vice President for Planning, Assessment, and Administration, and Associate Professor of Islamic Studies and Christian-Muslim Relations at The Lutheran Theological Seminary at Philadelphia (LTSP). He earned a Ph.D. in Islamic Studies from the Centre for the Study of Islam and Christian-Muslim Relations, University of Birmingham, UK. He holds a Master of Divinity  from Luther-Northwestern Theological Seminary in St. Paul, MN, and a bachelor’s degree in Cross-Cultural Studies/Middle Eastern Studies from Capital University in Columbus, Ohio.

Before joining LTSP, he served as the Coordinator of Graduate Studies at the Evangelical (Presbyterian) Theological Seminary (ETSC) in Cairo, Egypt, Director of the Center for Middle East Christianity at the ETSC, and adjunct lecturer in Islamic studies at the Dar Comboni Institute for Arabic and Islamic Studies in Cairo.

He is the author of five books, including most recently, The Contested Origins of the 1865 Arabic Bible: Contributions to the Nineteenth Century Nahḍa published by Brill in 2015.

Dr. Grafton will teach both introductory and advanced levels and will direct students in Hartford Seminary’s newly established Ph.D. in Islamic Studies and Christian-Muslim Relations.

In 2015, the Henry Luce Foundation awarded Hartford Seminary a four-year grant of $475,000 to provide substantial support for a scholar with expertise in Christian-Muslim relations from a Christian perspective.

“Hartford Seminary’s longstanding partnership with the Luce Foundation uniquely positions us for work together in the highly innovative and societally necessary focus on Christian-Muslim relations in a rigorous academic environment,” President Heidi Hadsell said at the time of the grant announcement. “This work will cement the Seminary’s reputation as an international leader in interfaith education and fulfill the Luce Foundation’s goal to foster international understanding through the lens of American religious life.”