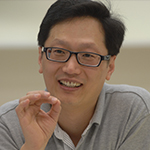 Academic Dean Uriah Kim has announced that he will be leaving Hartford Seminary at the end of 2016 to take a position with his alma mater, Graduate Theological Union of Berkeley, California, where he will be Dean and Vice President for Academic Affairs and John Dillenberger Professor of Biblical Studies. He will start there in January 2017.

According to a press release from GTU, “As Dean, [Dr.] Kim will oversee the further development and implementation of the GTU’s newly redesigned PhD program as well as its MA program, working with faculty and administrative colleagues to create an interactive learning environment that fosters dialogue among the world’s religious traditions and across academic disciplines.”

GTU President Riess Potterveld celebrated the announcement of Dr. Kim’s hiring. “I look forward to working with Uriah as we further expand the representation of the great world religious and wisdom traditions at the GTU. His academic background and service at Hartford have prepared him to lead the next chapter of the GTU’s evolution as a major center for interreligious study.”

Dr. Kim has worked at Hartford Seminary for 11 years as Professor of Hebrew Bible and was appointed Academic Dean in 2012. During his tenure as dean, he directed the school’s reaccreditation self-study, guided and wrote a new faculty handbook, and developed an assessment plan for the school’s degree programs. He also worked with the faculty and administration to design a new Ph.D. program in Islamic Studies and Christian-Muslim Relations, helped to develop a new master’s program in Transformative Leadership and Spirituality, and worked with faculty to advance the school’s online curriculum.

Dr. Kim received his Ph.D. from the Graduate Theological Union in 2004, and was named the GTU’s 2013 Alumnus of the year. He also holds an M.Div. from Princeton Theological Seminary in New Jersey, a ThM from Candler School of Theology of Emory University in Atlanta, and a BA in philosophy from New York University.