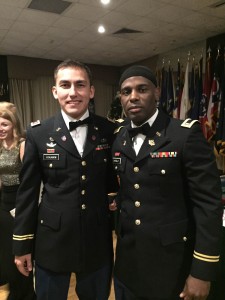 Hartford Seminary was thrilled to learn that 2014 Islamic Chaplaincy Program graduate Asnage Castelly will wrestle for Haiti in the 2016 Olympics, and in fact, has made history as Haiti’s first Olympic wrestler.

Asnage (at right in photo, at left is 2016 graduate Iskandar Atajanow) is the only wrestler on Haiti’s Olympic team. In addition to his wrestling career, he is a U.S. Army chaplain and travels between the U.S. and Haiti with his wife and young child.

According to his bio, Asnage was born in Haiti and moved to the United States at the age of nine. In high school, he wrestled for the Irvington (N.J.) Blue Knights and was an All-American. He then competed as a Division II wrestler at American International in Springfield, Mass.

As a military chaplain, Asnage counsels military personnel, arranges for and conducts workship services, and provides pastoral care, among many other duties.

We will be following Asnage’s journey to the Olympics and throughout the games!